They are called the Shadow Guardians, and they are a force of nature, striking out in the name of justice… striking against those who transcend the limits of law and order. Alone, each member is a highly-skilled artisan and potent combatant. Together, they are all but unstoppable.

But they didn’t begin there.

The man who would one day come to lead their ranks, J. J. Moore, was once a computer wunderkind, happy with the life afforded to a Silicon Valley Baron. That life, however, had no defense against treachery from within. One moment, J. J. was riding high. He was very, very rich and very much in love. He lost his fortune, the object of his affection, and his sight at the same time.

But he didn’t die.

And a bunch of people are going to wish he had.

The second volume of THE FORGE.

John James Moore survived his first test. The blind man has established himself as an assassin worth fearing. But now, it is time for him to start building his team. He’s ready to fetch his first ingot and begin forging the perfect weapon in his
private war for justice and vengeance.

But first comes the fetching.

Sword-to-sword and gun-to-gun, the Blind Smith is a capable operative. And don’t even let him get to a computer. But that doesn’t mean he’s ready to start making a team, does it? The ingot he seeks to forge will not be easy to lift or fold, and then there’s the matter of all the heat he must go through in order to put it on the anvil.
Also, his is not the only perspective that must be considered. This ingot has a name: Sonya Bocharova, and she has her own life to live. Recruiting is not the fun-filled, cat & mouse game so many might believe it to be. Not when lives are on the line. Just how does one get another to take on the perspective of a blind man?

Muted Rage picks up where The Blind Smith left off, taking us deeper into The Forge… to where the Shadow Guardians begin to take form.

Dive into the continuation of an exciting new action-filled series from the USA Today and Wall Street Journal best-selling author, G. Russell Gaynor.

Be the first to review “Muted Rage” Cancel reply 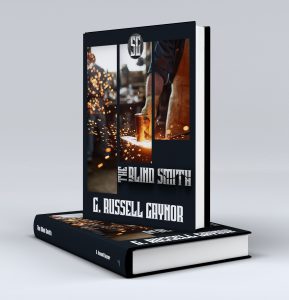